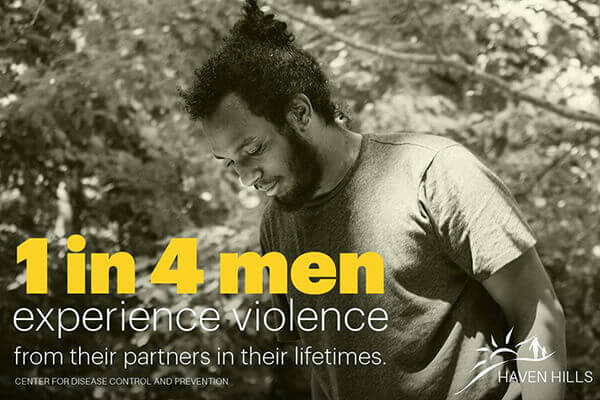 When we talk about domestic violence, we often assume that the survivor is a woman. However, often overlooked are the thousands of men in this country who are victims of domestic violence, suffering physical, mental and sexual abuse in both heterosexual and same-sex relationships.

According to the CDC, one in four adult men in the U.S. will become a victim of domestic violence during his lifetime. That’s approximately three million male domestic violence victims every year; or one man in America who will be abused by an intimate or domestic partner every 37.8 seconds.

Anyone can be the victim of domestic abuse and everyone who needs protection deserves access to it.

For 6 years Manuel and his children suffered abuse from his gang-affiliated wife. When it escalated, he took his children and ran. They spent a month living on the streets before he finally called a crisis hotline and asked for help.

Manuel has been a client of our transitional shelter for one year. During that time, he has been able to get his high school diploma and a culinary arts certificate. More importantly,

“Thanks to the program I acknowledged the issues that led me to be in relationships that were not healthy and to work on making sure that I develop healthy boundaries…My children are happier and safer now. They went through a lot emotionally but thanks to the counselors, they have been able to acknowledge their emotions and have learned different coping mechanism, which I know will help them in the long run.”

Manuel is committed to helping others understand that, “Domestic Violence doesn’t happen only to women. Men are victims too. It is something that should be talked about because the more we talk about it, the less taboo it will become.“

Manuel tells us his next step is to find employment in a restaurant with the longer term goal of owning his own catering.

Back to all stories Next: Survivor Story #4